By Mark Batterson | Posted In Why It Matters

On May 25, 1979, Denis Waitley was desperately trying to catch a flight from Chicago to Los Angeles for a speaking engagement. There are easier airports to run through than O’Hare! When he arrived at his gate, they had just closed the Jetway. Denis begged them to let him on that airplane. No luck! Out of breath and out of patience, he made his way to the ticket counter to register a complaint and rebook his travel.

While he was waiting in line, an announcement came over the airport intercom. American Airlines Flight 191 to Los Angeles had crashed upon takeoff.

The engine on the left wing of that McDonnell Douglas DC-10 separated from the airplane right after takeoff. The unbalanced aerodynamics caused the plane to roll, a roll from which it could not recover. All 258 passengers, as well as 13 crew members, died in the crash. It was the deadliest aviation accident in United States history.

That near-death experience had a life-altering impact on Waitley. Had he been on time, it would have been the last day of his life. Needless to say, he never registered his complaint. In fact, he never returned his ticket for Flight 191. He took his paper ticket and put it in a visible place in his office.

On difficult days, the days when Waitley felt like throwing in the towel, all it took was one glance at that ticket to regain perspective. That ticket was a constant reminder that every day is a gift. It helped him live his life in day-tight compartments. Waitley’s ticket for Flight 191 is what I would call a life symbol — a symbol from the past that gives meaning to the present and functions as a compass for the future.

Even when we don’t feel it, eternity is invading time every second of every minute of every hour of every day!

What are the symbols from your past, painful and joyful, that make each day more meaningful? My life symbols include an oxygen mask from one of my asthma-related hospitalizations; the graduate assessment that showed a low aptitude for writing; a brick from the crack house that is now Ebenezers Coffeehouse; and my grandfather’s well-worn, well-read, well-lived Bible that is almost a century old.

In one sense, those life symbols are worthless. Anybody want an old oxygen mask? I didn’t think so! But to me, they’re priceless! Why? They taught me lessons I can’t afford to forget. They represent minutes that turned into moments that I will remember forever.

Remember David versus Goliath? After defeating Goliath, David took Goliath’s armor and parked it in his tent. We read right past this detail, but it’s a big deal. And I mean that literally. Goliath’s armor weighed 125 pounds. I’m not sure David weighed much more than that. Why would he go to all the trouble of undressing Goliath and putting his armor in his tent? If Saul’s armor didn’t fit him, Goliath’s armor certainly would not have fit! If you can’t wear it, why save it?

Like Waitley’s ticket to Flight 191, Goliath’s armor functioned as a life symbol. When David got discouraged, one glance at Goliath’s armor reminded him that he was nobody’s underdog. That armor fueled holy confidence for the rest of his life. I bet David marked his calendar, celebrating it as Giant Day ever after. Putting Goliath’s armor in his tent was a stroke of genius. We might want to follow suit — pun intended.

According to developmental psychologists, if an object is removed from a baby’s field of view, it’s as if that object ceases to exist. That’s why peekaboo is so much fun with young children! They have not developed the understanding of object permanence. Simply put, out of sight, out of mind. We never really outgrow this tendency, do we? This is why we build memorials and celebrate holidays.

We have a tendency to remember what we should forget and forget we should remember. The way we overcome spiritual amnesia is by building altars. What do we put on them? Life symbols. Those life symbols don’t just point back to the past; they point to the future. Our future-tense faith is a function of God’s past-tense faithfulness. The older we get, the more faith we should have! Why? More testimonies.

You can accomplish almost anything if you work at it long enough, hard enough, and smart enough.

There is a branch of philosophy called teleology. It’s the doctrine of design, and it’s the way we connect the dots just like David did with the bears and the lions. For us, the arrow of time points from the past toward the future. God is working the opposite way! Not only are His eternal plans and purposes counterintuitive, but they are also counterclockwise. God has already prepared good works for us in advance. They seem future tense to us, but they are past tense to God. Remember the walls of Jericho? Even before they came crashing down, God declared it done!

That is the timeless challenge issued by Thomas Shepard, a Puritan pastor and key figure in establishing Harvard College. Shepard believed in approaching our spiritual lives like a scientific experiment, and I couldn’t agree more.

What if we approached every day that way?

On Jan. 30, 1930, Frank Laubach initiated an experiment he called “the game with minutes.” He referred to it as “a new game for something as old as Enoch.” The goal? Continual awareness of God’s presence. Laubach turned his everyday life into a laboratory and started experimenting with his spirituality. Six months into his research, he wrote these words in his prayer journal:

Last Monday was the most completely successful day of my life to date, so far as giving my day in complete and continuous surrender to God is concerned. … As I looked at people with a love God gave, they looked back and acted as though they wanted to go with me. I felt then that for a day I saw a little of that marvelous pull that Jesus had as He walked along the road day after day “God-intoxicated” and radiant with the endless communion of His soul with God.

The greatest challenge to this kind of communion with God? Laubach isolated our root problem: “We shall not become like Christ,” he said, “until we give Him more time.”

“You will find this just as easy,” said Laubach, “and just as hard as forming any other habit.” But over time, you’ll win more days than you lose. And the compound interest will catch up with you. “The results … begin to show clearly in a month,” said Laubach. “They grow rich after six months, and glorious after ten years.”

I’ve already appraised the value of a single day. In God’s economy, a day is like a thousand years. God takes every day seriously, and so should we. How? By stewarding every day as a gift from Him. That said, I want us to end on a more playful note. Winning the day is fun. Think of it as the game with minutes. The goal of the game? Unleashing the power of 24 hours! 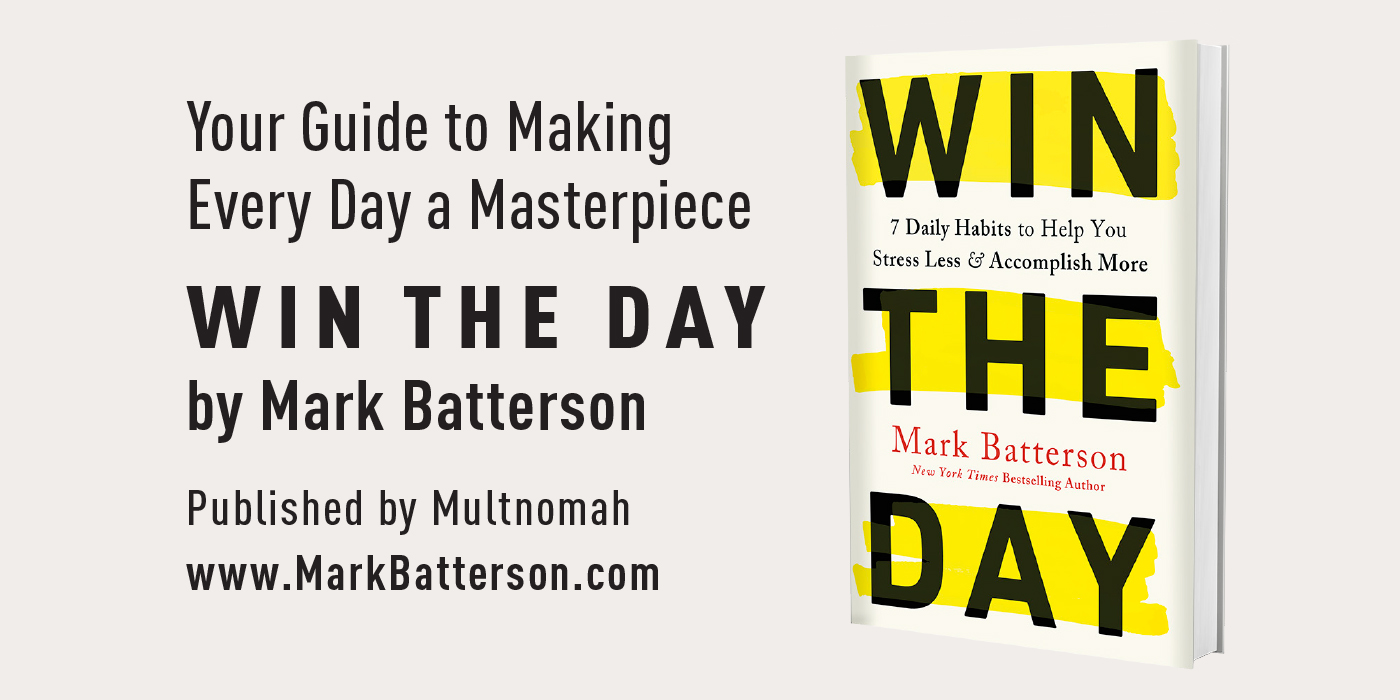 Another Day, Another Adventure

Many years ago, I spent a life-changing week in the Galápagos Islands. That archipelago may be the closest thing to the Garden of Eden left on earth. We saw pelicans that looked like prehistoric pterodactyls dive bomb into the ocean and come up with breakfast in their beaks. We came face-to-face with giant tortoises and marine iguanas. We went swimming with sea lions, which is more dangerous than I realized at the time. Oh, we also went cliff jumping at Las Grietas. My legs were black and blue for a month, but the adrenaline rush was worth it.

At one point during that unforgettable week, I found a Spanish Sprite can. Yo hablo un poco español, but I knew enough to translate what it said. In fact, these four words have been a life motto ever since: Otra Día, Otra Aventura.

Another day, another adventure.

Not every day is as amazing as the extraordinary days I spent in the Galápagos, but even the most mundane of days is no less miraculous! Remember, you’re on a planet that is spinning at 1,000 miles per hour and speeding through space at 66,000 miles per hour. We do a celestial 360 every 24 hours! That’s worth celebrating every day, isn’t it?

“Surely goodness and mercy shall follow me all the days of my life” (Psalm 23:6, ESV, emphasis added).

You can accomplish almost anything if you work at it long enough, hard enough, and smart enough. It’s time to unleash the power of 24 hours! You’ve got this. Why? God’s got this! It’s time to stress less and accomplish more.

Adapted from Win the Day: 7 Daily Habits to Help You Stress Less & Accomplish More. Copyright 2020 by Mark Batterson. Used by permission of Multnomah, an imprint of Penguin Random House LLC.

This article appears in the Winter 2021 issue of Called to Serve, the Assemblies of God Ministers Letter.

See inside the inspiring curriculum that guides all ages to engage the Bible in a way that transforms them.